The buzz about Bauhinia 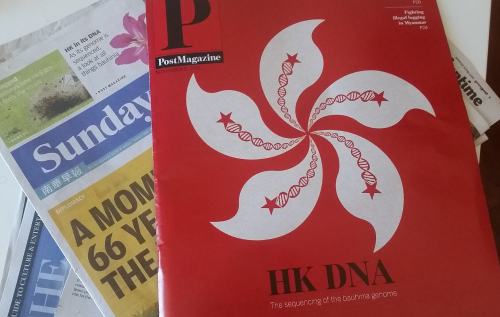 Since we launched a couple of weeks ago, we’ve had quite a lot of interest in this Bauhinia Genome project. The SCMP put us on their front cover (see pic above) and ran a great article that described our project and the historical mystery around Bauhinia blakeana and its discovery on a Hong Kong hillside by a French missionary.

The story was also picked up by Hong Kong Free Press and as both articles point out, the tree is a sterile hybrid. As far as we know, all of the hundreds of thousands of Bauhinia blakeana around the world all came from cuttings from this one Hong Kong tree… the mystery is, how did it get there in the first place?

We were also on the radio with Noreen Mir over at RTHK Radio 3! That was a lot of fun and it felt very rock ‘n’ roll being in the lobby as local pop-stars walked in and out. Science IS the new rock ‘n’ roll! Sort of. 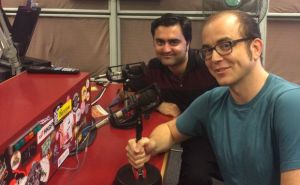 Rob and Scott at RTHK Radio 3 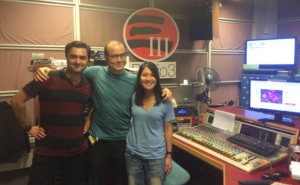 Rob and Scott with Noreen Mir from RTHK Radio 3

During the show (listen to the recording here) we tried to focus on our aim to develop high tech skills in Hong Kong. Hong Kong has some great pedigree in genomics through BGI-HK and with researchers like Dennis Lo coming up with ground-breaking health tests like non-invasive pre-natal testing but, Hong Kong really does need to build on these successes and work towards being a knowledge-based economy fit for the 21st Century. That’s why we will be getting local university students to perform the data analysis (if we get funded!) and why we want to get into schools to inspire the next generation of scientists.

We also want you to get involved with #BauhiniaWatch, and help us map Hong Kong’s Bauhinias and perhaps even discover the elusive seeding Bauhinia.

Finally, if you happen to be free on 3rd December, you can come along to meet us for our Cold Beer and Genomics event with the Science Lovers and Geeks Meetup group. Hope to see you there!